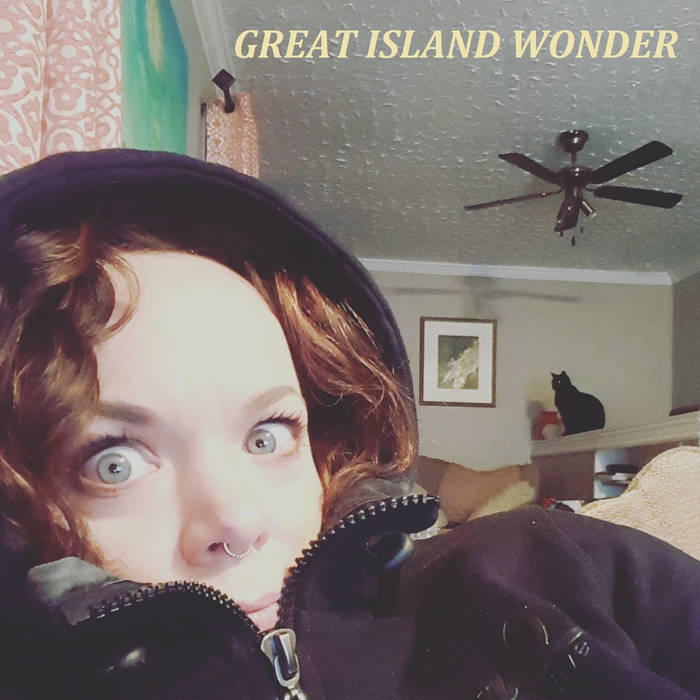 A sister, companion in ways, to “Live at Wood Hall” recordings of concerts earlier that Spring – this night’s undercurrents surface in song debuts of “I Don’t Know”, “You”, “Skeletons and Spirits” and reflect a different sort of intensity.

This date was soon followed by a cross-Canada tour, embarking birth-place Nanaimo, BC and reaching St. John’s and Corner Brook, Newfoundland, on Canada’s Atlantic coast, where Allison Crowe made her new home. Bi-coastal love established then is grown ever-deeper now. (Another shift – this may be the final concert capture of entirely vocal-piano repertoire. By her next tours of Canada and Europe Crowe was including guitar songs, as well, in her set. In more recent years she’s added fiddle and bodhran.)

Sharing the tape – John MacMillan describes the 'Live on Denman Island' doc in these 'Personal notes':

“To be honest, this was a fairly ‘dark’ show - there seemed to be demons rearing their ugly heads for this concert. The song selection is pretty, um, deep and somewhat, well, I dunno what to call it. Not to go into all the dreary details, but I was beginning the end of a relationship with a partner who was the catalyst of making this show happen, and I believe Alley was going though a breakup that kind of came to a peak at this show. Like I say, the song selection and audience banter seems to reflect this stuff that was going on behind the scenes. Despite the personal hardships, I think it is a brilliant performance, with some humour thrown in as well. Allison Crowe is a great songwriter, a fantastic musician, and an amazing vocal talent. I hope you enjoy this recording as much as I enjoyed the show.”

(MacMillan’s 'Technical Notes' to the recording are found below on this “Great Island Wonder” album page.)

Special thanks to volunteers and folks of Denman Island,
BC Canada – their neighbours on Hornby Isl. – and you!

Technical notes:
This is a multitrack recording, captured fairly well in a kind of oldschool lo-fi fly-by-night fashion. haha. It is an 8 channel live recording captured as 4 stereo pairs and re-assembled later in the computer. For the first stereo recording of the four, there were 2 Shure SM-57's 8 to 10 inches over the piano strings pointing a little forward at the hammers inside the piano about 18 to 22 inches apart and positioned centrally over what I thought looked like the best average of being that were recorded through a Mackie CR1604 mixer (with the XLR-10 mic pre expander pack for 16 full mic inputs) fed out directly into my computer's soundcard panned hard left - right. I think I also mixed them into the room live at maybe 30% panned to 20% off of being mono (so maybe 11 o'clock and 1 o'clock?) but the Denman Island Community Hall's great sound and acoustic piano filled a lot of the room naturally on it's own! These mics give the recording an interesting organic stereo sound.

The second stereo recording that captured a different part of the night was Allison's own personal vocal mic – a Neumann KMS105A condenser - and an extra Shure SM-58 mic that I mounted under the piano on the base of the piano's wheeled metal frame pointing up at the bottom of the piano. These were recorded off a second auxilary output of the Mackie board into a Sony MiniDisc recorder panned hard left - right so Alley was in one side and this third piano mic was in the other side. Obviously the vocal feed was used in the PA and the stage monitors prominently to match the acoustic piano in this lovely sounding venue. I remember we used a combination of Alley's owm travelling PA on stage as the monitor mix (in mono) and the Community Hall's Stereo PA to fill out the sides of this wide hall. I thought I did an alright job of making the whole hall sound good (and it was pretty full) but Alley's stage PA "monitor mix" was pretty hot and I heard later that the sound blew a few of the older ladies in the front rows heads clean off being so loud! Rock out! The 3rd under the piano mic was not in the live show's PA mix but is a part of the final mixdown recording.

Third of our stereo captures is a pair of Genexxa re-branded Shure Prologue 16L condenser mics on either side of the stage facing the audience going directly into another Sony MiniDisc unit stereo mic input. The mics were running through a lot of line (and a 100 foot 20 channel snake) out to my own handmade 2 XLR to stereo 3.5mm mic jack, and there was some buzzing noise interference that got captured from the lighting rig along with audience wide stereo ambience. I have done my best at the time to de-noise the buzzing to salvage the ultra-wide room capture, and where I needed to use it the noise is minimal and bearable but occasionally audible.

Fourth and finally a stereo capture from a Roland Edirol R-04 digital recorder internal mics at the middle back of the room where I was. The unit was placed on a stack of equipment to place it at about 6 feet high (head height) and above the level of the seated audience between the recorder and the stage. This recording is a nice stereo room capture of all the sounds in the room that night. The sound from all the PA speakers. The direct sound from the grand piano with the full open lid. Natural room reverb. Audience applause. And no buzzing humming annoyance of a bad noise! Unfortunately this part of the recording is incomplete. The recorder belonged to a friend in the audience who'd just purchased this new digital audio recorder and wanted to test it. It only had a small memory card, and it ran out about halfway through the show. Also, it is a lossy master recording, captured in mp3 format.

All of these 4 stereo sources to make an 8 channel master live recording were manually re-synched in Cubase VST32 5.1 and mixed down with appropriate effects where necessary. Equalization and compression on vocal and piano mics, some stereo reverb on the mono vocals and mono under-piano mic, de-noising on the stage ambience mics. The Edirol R-04 ambience source is used for natural room reverb and audient sound for the first half of the show, and crossfaded into the stage Shure ambience mics as the Edirol source was incomplete.

I spent months and months (years, really) finding what I think is a proper mix of these 8 tracks for this show. For a long time I abandoned this recording, as the Shure stage ambient mics had some noise interference from the lighting board (big buzz), but a recent de-noising tool made it useable again. I mixed and remixed and re-re-re-remixed this show until I settled on this mix as being the one I was happy with. Fresh ears and an indecisive mind made me keep changing it! I just wasn't happy with any of my mixes of this recording until recently. When i finalized the mix and made a copy for Adrian (Allison's manager) I erroneously bypassed all the EQ settings that I had found to work, making a flat lifeless mix by accident in my rush to give a copy to them at a recent show. Oops! This version is a correction of that mistake, restoring the intended sound of my "final" (for now!) mix.