"Her eyes they shone like a diamond..." ~ Black Velvet Band 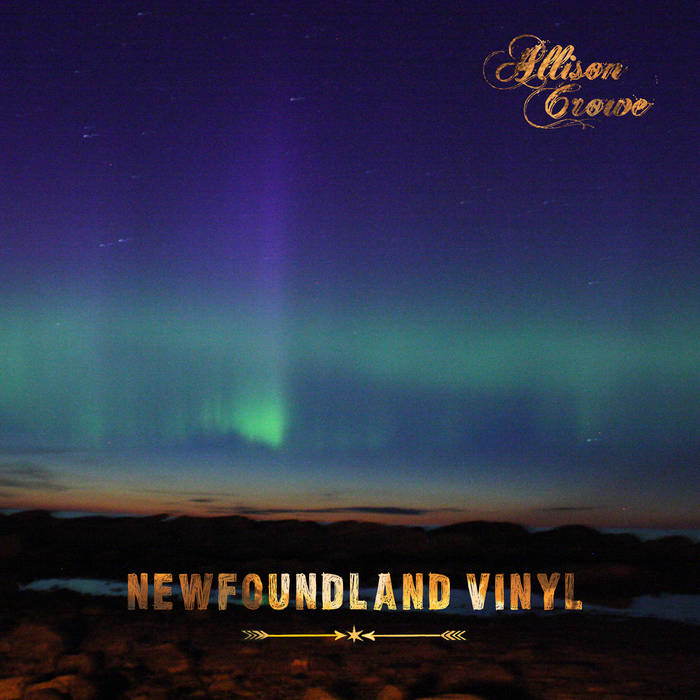 "What a voice, what a voice, what a voice!" remarks veteran music reviewer Muruch posting on the ‘No Depression’ blog. “It plays like a lovely, vintage collection of traditional Irish and Canadian folk ballads, lively sea chanteys and drinking songs, parlour songs and country tunes with surprising retro, girl-pop harmonies woven throughout. The album is full of dazzling melody and such a unique charm. And Allison’s voice is so strong and spectacular,” writes the West Virginia-based folk afficionado. “It has the timeless beauty of a classic folk album.”

“It seems simple, but it really is a classic treatment of the classic songs that are performed by Crowe. She has renewed with stylish vigor traditional songs that deserve new life and interpretations,” says East Coast Kitchen Party.

"I am so grateful to have been asked by Theatre Newfoundland and Labrador, two years in a row, to put together songs and musically direct for a show called 'Newfoundland Vinyl'. As part of the Gros Morne Theatre Festival, I get to work with extremely talented and fun people each Summer in a gorgeous setting - Cow Head, NL. From the vast and encyclopaedic sea of beautiful music to come from, and out of, Newfoundland and Labrador, here is a collection of some of the songs from this year's show," notes Allison Crowe.

BLACK VELVET BAND – lively traditional song recorded on both sides of the Atlantic, including a version by the legendary 'His Nibs' Harry Hibbs

MEN WHO DIE FOR A LIVING – Gary O’Driscoll, award-winning songwriter and producer from Bay Bulls and NL's southern shore, wrote this potent elegy “for the miners here and gone”

CLIFFS OF BACCALIEU – Jack Withers sea-faring song has previously been sailed by such distinct voices as Anita Best, Louise Morrissey and Stan Rogers

SONNY'S DREAM – Newfoundland’s “Man of 1000 Songs”, Ron Hynes, created this anthem of the heart and home

SEVEN OLD LADIES – a bawdy song which musically plumbs a 1700s nursery rhyme, ("Johnny's So Long at the Fair") – and a tune also recorded by the great Joan Morrissey

SWEET FORGET ME NOT- first published in 1877, this tender tune by Bobby Newcomb was the first single, and a vinyl hit on the mainland as well, for Cape Shore’s Eddie Coffey.

"Allison Crowe Creates a Remarkable Recording with Newfoundland Vinyl" says East Coast Kitchen Party. “It seems simple, but it really is a classic treatment of the classic songs that are performed by Crowe. She has renewed with stylish vigor traditional songs that deserve new life and interpretations,” continues ECKP. “This record was made for sitting back in the big chair while relishing a favourite drink. Maybe Screech. It will probably bring a tear to the eye of a few. It’s that good.” ~ September 6, 2013 - see full review @ www.eastcoastkitchenparty.net/Music_Newfoundland_Vinyl.php

"It plays like a lovely, vintage collection of traditional Irish and Canadian folk ballads, lively sea chanteys and drinking songs, parlour songs and country tunes with surprising retro, girl-pop harmonies woven throughout. The album is full of dazzling melody and such a unique charm... It has the timeless beauty of a classic folk album." ~ Muruch / No Depression blog www.nodepression.com/profiles/blogs/allison-crowe-newfoundland-vinyl-rubenesque-records-2013 + www.muruch.com/2013/07/allison-crowe-newfoundland-vinyl.html

”CD OF THE WEEK: Allison Crowe is bi-coastal and her latest record on her own Rubenesque label isn’t a CD. She is from Nanaimo and her manager still lives on Vancouver Island, so, the island ties are there even if she now lives most of the time in Corner Brook, Nfld. Crowe’s ninth record is weirdly typical of her in that it defies convention, stick-handles around the pop idiom, shows imagination and daring, and opts for vinyl. Her Newfoundland Vinyl balances traditional folk and more contemporary sounds that serves as well as a soundtrack to a Newfoundland festival. A marvellous singer, Crowe plays down vocal gymnastics in favour of restraint, which translates as respect. The arrangements are minimal — often no more than guitar enhanced by background vocals — with a little humour thrown in to lighten the load. ~ Tom Harrison, The Province (Canada), "Garage" - August 6 2013 @ blogs.theprovince.com/2013/08/01/tom-harrisons-garage-for-aug-6

"There is something about this album that makes the songs become the soundtrack of your life. The grace and subtlety in the instrumental and vocal arrangements make this a one-of-a-kind must-have album for 2013." ~ The Celtic Music Fan celticmusicfan.com/2013/07/22/newfoundland-vinyl-by-allison-crowe

With thanks to: Adam and Linkers and Johnny + all of our families and extended families and friends; my friends in Nanaimo; all the lovely people of Cow Head, NL; the entire company at GMTF and everyone involved with TNL; cast and crew of Newfoundland Vinyl and NV: The Flip Side; Adrian Payne (pictured); Dr. Tipple, Dennis and the folks at Humber Valley Veterinary; Dr. Venditti, Dr. Chou, Dr. Bailey, Sonia, and team at the Atlantic Veterinary College in PEI; + the great people I met during our Charlottetown stay; Martin House; & Brent and his pup Zephyr for being so awesome.

Rubenesque Records Ltd. - Made in Canada