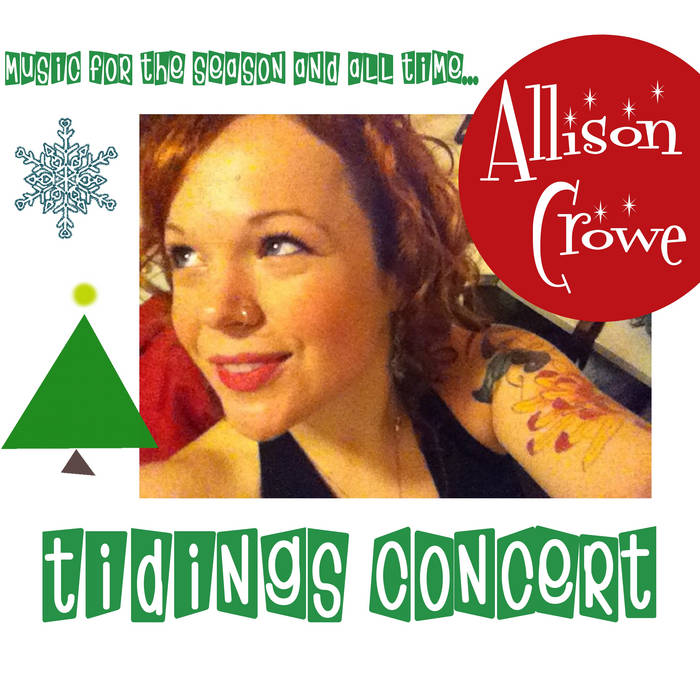 It’s coming on “Tidings” – and that means Allison Crowe rings out such traditional favourites as “It Came Upon a Midnight Clear”, “In the Bleak Midwinter”, and “The First Noel” alongside the modern canon of Joni Mitchell, Patty Griffin, Lennon & McCartney plus original song selections including the elegiac “Arthur” and the epic, foot-stomping, “Disease”.

Drawing themes of faith, hope, sorrow, joy, redemption, transcendence and more, it’s time to reflect and to rejoice in a musical melding of the sacred and secular. Stirring together Christmas carols and not-so-traditional songs, Allison Crowe's concert recording decks us all in comfort and joy whatever life’s circumstances.

On a Winter’s night in Canada – at St. James Hall, in Vancouver, BC – this “Tidings Concert” brought together fans old and new – along with folks making an Hollywood blockbuster (a movie code-named “Autumn Frost” which was then filming in the Pacific Northwest).

The film-makers invited Allison Crowe to appear in "Man of Steel" - an epic science fiction movie adventure featuring Superman. The scene in which Allison cameos was filmed just 15 minutes drive from where she was born! In a great north woods road-house, where Clark Kent is working for a spell, Allison Crowe is the 'Singer in Cassidy's' and performs "Ring of Fire", a song penned by June Carter and Merle Kilgore and made iconic by 'The Man in Black'. “I’m a big Johnny Cash fan. And I’m a big Allison Crowe fan," reveals “Man of Steel” Director Zack Snyder (Dawn of the Dead, 300, Watchmen, Sucker Punch). "So the combination to me seemed like an awesome opportunity if we could make it happen.”

Allison Crowe’s excited and inspired by the professionalism and artistry of the stellar cast and crew – and the full team united in making this cinematic adventure. Adding to the festivities, all were invited to join in the fun of “Tidings”.

These sounds of the season are captured by Audio Engineer and Mixer Brad Graham, and FOH Engineer Ed Johnson - and mixed at Turtle Recording in White Rock, BC.

The album set features 18 in-concert performances, and, for the first time on record, audio from the “Hallelujah” video which now has a worldwide audience of greater than 10 million people (more than eight million views on YouTube alone).

A sister project is the Peter Buckle-directed "A Corner Brook Tidings" – “a film featuring Allison Crowe and you”. This documentary was created with gracious assistance of the Newfoundland and Labrador Arts Council – and kind shepherding by Katrina Rice, NLAC Program Officer.

"Allison Crowe's voice is as much a manifestation of Christmas spirit today as Bing Crosby's was in 1942,” says The Pique. “It's as warm as an open fire; as gorgeous as snow-frosted evergreens; as tender as that hug you give your mother on Christmas day."

YOU: support and inspiration always