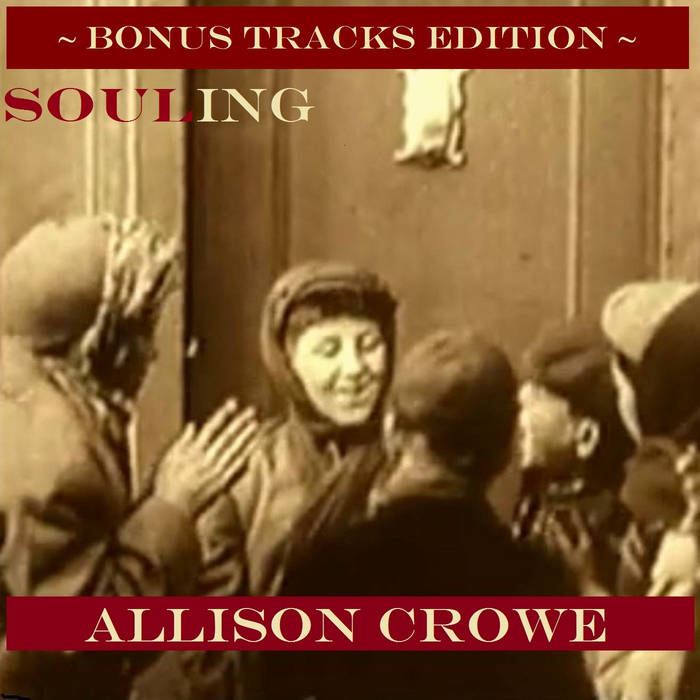 “Souling is an album that redefines the usual traditional holiday tunes and also about how they are being rendered. It is in this rendition that an artist tells the listeners her true identity. It’s beautiful and fresh,” says The Celtic Music Fan blog.

Allison Crowe’s gorgeous voice brings tidings of comfort and joy with “Souling”. The songs themselves, performed wholly a cappella, have a purity of expression – a 21st century take on music of faith and spirit – sounds and themes aired by carolers and ‘soulers’ of old. And, in this expanded, bonus tracks, edition – tunes of heart and hearth from the popular songbook join in the fun.

The genesis of “Souling” is found within the creative family of Theatre Newfoundland and Labrador, an Atlantic Canadian professional theatre company founded in 1979. Each Summer from 2012 through 2015 Allison Crowe's served as Musical Director of "Newfoundland Vinyl" – an hit stage show produced by TNL for the Gros Morne Theatre Festival. Alongside this ongoing success, in 2014, TNL Artistic Associate SaraH McDonald invited the Corner Brook, NL-based musician to also be MD for a vibrant production of “A Christmas Carol”.

The Adaptation of this classic Charles Dickens story by playwright Jeff Pitcher, TNL’s Artistic Director, excited Crowe’s musical imagination – as did the desire of McDonald, the play’s Director, to incorporate songs in the style of Victorian Era carolers.

So inspired, Allison Crowe immersed herself in curating and arranging music for choral presentation – a process which gave an unique breath of life to these solo performance recordings. “Her arrangements are undeniably exquisite,” notes Celtic Music Fan.

In 2015, Crowe musically directs a new TNL show for the holiday season – “The Gift of the Magi”. O. Henry’s short-story is adapted for the stage by Jon Jory and directed by TNL’s AD Jeff Pitcher. Carollers in this show will perform favourite Christmas carols, and also modern, secular, tunes. And from these latter songs, popularized by Elvis, Eartha Kitt, Louis & Ella, Nat King Cole and Stevie Wonder among others, Allison Crowe’s selected the newest tracks for “Souling”.

A decade ago, Allison Crowe first released “Tidings| – an album of singular interpretations - “River” (Joni Mitchell), “Hallelujah” (Leonard Cohen), “In My Life” (The Beatles) and more from the secular canon – alongside such loved traditional carols as “Silent Night”, “The First Noel”, and “O Holy Night”. “Tidings” has proven to be a modern classic – “music for the season and all time”.

“I know I will be playing this album next holiday season” ~ Baxter Labatos, The Celtic Music Fan - full review @ celticmusicfan.wordpress.com/2014/12/17/two-new-albums-by-allison-crowe